Scan through this whole page first.  Click an organ to read everything about that organ.

An ancient Chinese adage says: 'A tree grows from the roots.'  Yin and yang and the Five Elemental Energies form the main roots in the Taoist tree of health, and the entire edifice of traditional Chinese medicine and physiology is based upon the foundation of these energy principles.

The Five Elemental Energies and their cycles provide a practical working model through which the interrelationships between the human body and the natural environment may be understood and controlled.  They also illuminate the internal functional relationships between the body's various vital organs and explain how external elements such as foods and medicinal herbs influence the organs and their functions.  All aspects of human health, including physiology and pathology, diagnosis and therapy, are rooted in this remarkably reliable system of polar forces and cyclic energy transformations.

The traditional Chinese view of human physiology differs significantly from the Western view in that the Chinese have always focused attention on the function rather than the form of the vital organs. The Western medical practice of studying human physiology based upon anatomical locations of various organs as revealed in dissected cadavers makes no sense to Chinese physicians, because cadavers have no living energy and their organs are not functional. How can a dead body reveal anything significant about the dynamics of living energy? Furthermore, in addition to their biological functions and anatomical locations, the Chinese concept of 'organs' also includes the specific type of energy that infuses each organ, as well as the energy meridians that channel organ energies to and from other parts of the body.

Over the ages, Chinese physicians discovered two fundamental principles which govern the vital organs and regulate their functional relationships.  The first principle is that all the major organs are called zang or 'solid' organs and are involved primarily in functions of 'collecting and storing'.  The matching yang organs are called fu or 'hollow organs' and deal mainly with functions of 'movement and transformation'.  There are six zang and six fu, matched in six yin/yang pairs, and each one is regulated by one of the Twelve Major Meridians. The second principle is that each of the six pairs of organs is governed by one of the Five Elemental Energies, with Fire controlling two pairs.  The creative and control cycles of these energies orchestrate the functional relationships between the organs and determine how external environmental energies influence internal conditions.  Internal conditions are in turn reflected externally by the color, tone, and texture of 'the five apertures and five tissues', such as eyes and ears, skin and hair, which thus provide handy tools for diagnosing disease.

In the Chinese system, everything ultimately boils down to energy, a view which modern Western physics is beginning to verify.  Therefore, the Chinese approach to human health and physiology accounts not only for the effects of obvious visible substances such as microbes and toxins, blood and bile, but also for the invisible and even more pervasive influences of emotions and energies that have a direct impact on the human energy system.  As the energy therapist Dr. John Veltheim puts it: 'Science tells us that everything is energy and that matter is nothing more than energy in a different form.'  The Five Elemental Energies and their cycles provide an intelligible formula for diagnosing and correcting the energy disorders that lie at the root of most human ailments, and for taking preventive measures to avoid such disruptions before they occur.

Since the Chinese view differs so significantly from the conventional Western view of human physiology, a brief review of each of the twelve vital organ systems and their functions according to traditional Chinese medical practice is in order here, so that Western readers may gain a proper working perspective on the subject.  We'll run through the organs according to the Five Elemental Energies, first describing the associated 'solid' yin organs, then its 'hollow' yang partner.

The below chart illustrates where the meridians begin and end on the surface of the body, not showing the exact paths they take.  It also shows the 24 hour cycle which takes place in the body.  For every two hours throughout the day, one organ-channel is at it's peak, while the organ opposite of that hour (ie, bladder/lungs) is at it's low.  People who are sensitive enough to energy, always know the time of day just by feeling the rhythmic shifting of energy in the body.

The external trajectories of the Twelve Primary Channels either begin or end on the hands, feet, chest, and head.

The meridians themselves do not begin or end on the outside of the body, but originate deep within the organs and vital energetic centers (Chakras) of the body.  So, by modifying the energy of a point just beneath the surface of the skin, we are modifying the energy deep within the body.  The acupuncture or "tsubo" points are somewhat  like amplifiers along a telephone line (meridians) which interact with energy inside as well as outside the body.  Some tsubos can be connected to several meridians and are also major connection points for numerous pathways of energy where energy sinks into and flows out from the body.  A point itself can be seen as a tiny electrochemical 'organ' which serves as a gateway and storage house for all types of mind-energy, constantly "working" to maintain homeostasis.  Almost all of the classical acupuncture points have been detected with modern GSR devices and radioactive isotopic tracing and proven valid, some more strong or "important" than others. Along with many other points unrecognized by classical texts, about 700 of these vital energetic 'holes' have been detected, and many more are physically apparent (skin pores, hair follicles, sweat glands, eyes, ears, nose, mouth, anus, urethra).

It can also be seen that the Chakras are like giant tsubo points.  Note the similarity of the above picture (an individual tsubo point) to the ones directly below.  The distinct Funnel shape which roots down into a deeper channel of energy.  It can be considered that the size and collective function of a major acupuncture point can be compared to, for example, the size and collective function of a city on planet Earth (there are hundreds of cities).  The Chakras, in relation to this, would be like the size and collective function of a really big city (like New York) or an entire country or the Earth (Gaia) as a whole. These "giant tsubos" relate to the functions carried out in those particular areas of the body, and are also associated with some of the most important acupuncture points located along the Conception and Governing Vessels.

The below illustration shows the acupuncture points corresponding to the Seven Chakras.  It also shows the Three Dantiens, which are the three primary psychoenergetic centers noticed in Chinese medicine, equivalent to the Ayurvedic Seven Chakras.  The Lower Dantian is regarded as one of the most sacred energy centers, being located in front of the sacrum (which in latin means 'sacred'). Interestingly, the Lower Dantian also correlates to the first level of the Human Energy Field, which is the layer closest to our physical bodies, the nucleus of our entire being.

The Lower Dantian, or "Hara" is so significant that many practitioners diagnose the conditions of the energy meridians of the body through palpating the abdomen and observing the abdominal pulses.

"The connective tissue and fascia form a mechanical continuum, extending throughout the animal body, even into the innermost parts of each cell. All the great systems of the body – the circulation, the nervous system, the musculo-skeletal system, the digestive tract, the various organs – are ensheathed in connective tissue. This matrix determines the overall shape of the organism as well as the detailed architecture of its parts. All movements, of the body as a whole, or of its smallest parts, are created by tensions carried through the connective tissue fabric. Each tension, each compression, each movement causes the crystalline lattices of the connective tissues to generate bioelectric signals that are precisely characteristic of those tensions, compressions and movements. The fabric is a semiconducting communication network that can convey the bioelectric signals between every part of the body and every other part. This communication network within the fascia is none other than the meridian system of traditional Oriental medicine, with its countless extensions into every part of the body. As these signals flow through the tissues, their biomagnetic counterparts extend the stories they tell into the space around the body. The mechanical, bioelectric, and biomagnetic signals traveling through the connective tissue network, and through the space around the body, tell the various cells how to form and reform the tissue architecture in response to the tensions, compressions, and movements we make." 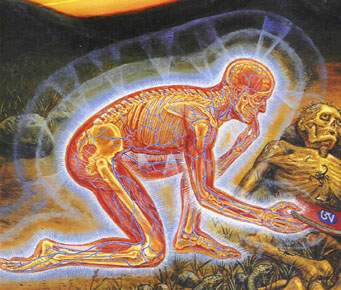 There are a variety of self-regulation exercises which can be done to strengthen and tonify the organs and their meridians.  One set of exercises, known as the Six Healing Sounds, works through the use of sounds which resonate with the different organs.  There are also Chi-Gong ("breath-work") exercises which focus on harmonizing the energy of the individual organs, the meridians, Chakras, and the organism as a whole.  Another way to do it, relating more to the Ayurvedic model of health and healing, is by stretching (Hatha Yoga).

Refer to the top of the page for information on the individual organs.